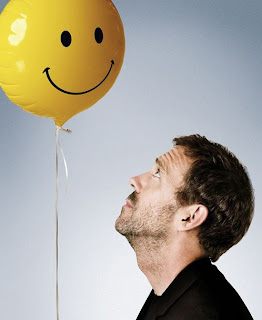 "House," despite being relentlessly formulaic, has become a staple of my limited TV watching. For one thing, the formula is new, or at least a new variation: the police procedural transplanted into a hospital. Various diseases come under suspicion, and then are cleared, as House and his team relentlessly track down the true culprit. Unfortunately, there's not much variation within this process. Action is mostly confined to the hopsital corridors, there are limited subplots, and like the old Perry Mason episodes, you can virtually set your watch by the steps in the action.
What distinguishes the show is the character of Dr. House—a brilliant but surly misanthrope who works as a diagnostician not because he cares in the least about his patients (indeed, he has contempt for them), but because he's intellectually fascinated by the diagnostic process. At its best, the show raises an interesting ethical question about the relation between intention and action. Would you rather be treated by the acid-tongued, but accurate, House, or his far more benevolent but less clever colleagues?
This plays out perfectly in an episode where House spots and stops an incipient epidemic among the hopital's newborns. The end of the episode finds him sitting alone in the infant ward, trying to puzzle out the source of the infection. In the foreground, a sweet-faced grandmotherly volunteer strolls by with a baby carriage, alternately wiping her runny nose and stroking the infant's cheek with the same hand. As we see House again, a gloriously bitter and satisfied smile crosses his face—once again, the ineptitude of the well-meaning has raised its ugly head.
Posted by Edward W Batchelder at 1:13 PM