As soon as this ended, the question arose why bio-pics always manage to portray difficult men as troubled geniuses, while difficult women mostly come across as just annoying hysterics?

In this case, it's partly because Jackie du Pré—for all that she may have been a gifted cellist—was no genius, and we're not going to see a better breed of women’s bio-pic until we raise our sights a bit.

Mostly, though, it's the perverse approach of this film, which focuses on du Pré's personal life at the expense of her music. Even a film like Immortal Beloved, which is almost entirely about Beethoven's love affairs, has some transcendently beautiful musical passages—most notably when he flees as a boy from his drunken, abusive father into the solace of a starry night, accompanied by the full orchestration of the Ninth Symphony—and these allow us to understand in some allegorical way what music meant to him.

The filmic du Pré, on the other hand, seems to have no inner relation to music at all—as a child she practices only to keep up with her talented older sister, and as an adult she actually resents the cello's dominance over her life. In one scene, she even locks her instrument outside during a snowstorm, the way an abusive parent might punish a misbehaving child. She's reconciled to it only after it helps her meet her future husband, the pianist Daniel Barenboim. 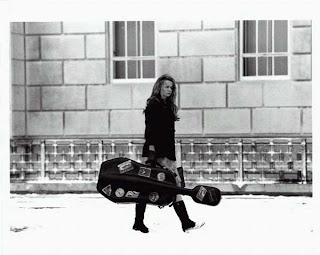 In fact, the film’s only joyful musical moment comes when Barenboim strikes up the Kinks' "You Really Got Me" at the end of a dull rehearsal, and du Pré picks it up adoringly. It's a School of Rock touch ("This is the way Beethoven should always be played," Barenboim declaims), but it is, after all, the sixties, and at least the musicians are having fun. One senses, though, that for du Pré it’s still less about the music than it is her recognition that she’s made great catch in Barenboim. In other words, a very old cliché: Women—even women of great talent—are always more about their outer relationships than they are their inner gifts.
Posted by Edward W Batchelder at 8:03 AM